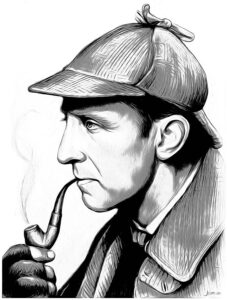 It’s a story that talks about how an engineer explains to Sherlock Holmes his Experience in which he was hired for a Job to fix a giant hydraulic press far away, and in the process, accidentally discovering an illegal coin press machine.

He runs with her until they get to a room where she tells him to jump out the window, he does, but he holds on for fear the people who get to the room might harm the woman, they thankfully don’t, but before he lets go, he gets his thumb cut off.

He runs away without noticing his wound, until he faints, and then magically wakes up near a train station, where he then goes to London and asks for help from Sherlock in clearing up what happened.

Sherlock Holmes, Watson, And the Engineers, and Lestrade, another detective, (maybe not Lestrade) go down to the town in which this happened, only to find the building has burned down accidentally due to the Engineer leaving his cigarette on the floor when escaping from the others. They don’t end up finding out where they went, but they do get a clue that even though their coin press got burned, they did end up escaping, and the woman ended up being fine. And so concludes the story, in which the Engineer lost his thumb, and the others lost their coin press.